EllMatic is a musician who creates rap music as a member of the ‘Het Verzet’ hip-hop collective originating from Heerlen, the Netherlands. In the beginning of 2018, EllMatic was ready to make his debut as a solo artist by finishing his first album. The album is called ‘Face the Blank Page’, referring to the daily struggles an artist can go through when experiencing a phenomenon rappers like to call ‘writer’s block’. While putting the final dots on the mixing and mastering of the album, Residue Design stepped in to create an album cover that would visualize the artists image in combination with the musical feeling the album should exemplify.

Since the album’s style is reminiscent of ‘Golden Age Hip-Hop’ from the 90’s time period, a clear choice was made to refer to this authentic style while combining it with more recent, modern design aspects. The front and back cover of the album are shown through photographs, shot with an analog TLR Rolleiflex 6×6 camera from 1958. Ensuring a true analog look and feel photography style, it exemplifies a stark contrast against modern digital ‘Instagram’ photography, which attempts to replicates the effect of film grain and discoloration. The fonts are a strong combination of calligraphy style headers and modern sans-serif body fonts that ensure clarity when being printed. To finalize the product, the design was adjusted to be applied to a vinyl cover, cd case and digital format. 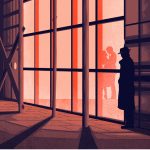